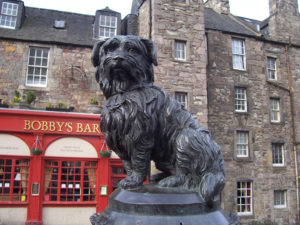 The story of Greyfriars Bobby is a legendary Scottish story, which is entirely true.

Greyfriars Bobby was a Skye Terrier who became known in 19th-century Edinburgh for spending 14 years guarding the grave of its owner until he died himself on 14 January 1872. The story continues to be well known in Scotland, through several books and films. A prominent commemorative statue and nearby graves are a tourist attraction. The story of this tiny little dog has inspired various books and films, and is still celebrated to this day.

In 1850 a gardener called John Gray arrived in Edinburgh. Unable to find work as a gardener he
avoided the workhouse by joining the Edinburgh Police Force as a night watchman.

To keep him company through the winter nights John took on a partner, a Skye Terrier called Bobby.

The years on the streets appear to have taken their toll on John, as he was treated by the Police Surgeon for tuberculosis.

John eventually died of the disease on the 15th February 1858 and was buried in Greyfriars Kirkyard. Bobby soon touched the hearts of the local residents when he refused to leave his master’s grave, even in the worst weather conditions.

The gardener and keeper of Greyfriars tried on many occasions to evict Bobby from the Kirkyard. In the end he gave up and provided a shelter for Bobby by placing sacking beneath two tablestones at the side of John Gray’s grave.

Bobby’s fame spread throughout Edinburgh. It is reported that almost on a daily basis the crowds would gather at the entrance of the Kirkyard waiting for the one o’clock gun that would signal the appearance of Bobby leaving the grave for his midday meal. (Source – Historic UK)

THIS ENTRY WAS POSTED IN Uncategorized ON March 7, 2016